It was born in 1850 in Lalatta di Palanzano, diocese of Parma, in a modest family but rich in faith. When he entered a seminary, he was ordained a 23-year-old priest. After 27 years of parish ministry and teaching, he became the rector of the diocesan seminary in Parma. From Leo XIII in 1890 he was appointed bishop of Guastalla, the following year Bishop of Como and in 1894 Cardinal and Archbishop of Milan.

Then, beside the baptismal name, he assumed that of Charles in honor of St. Charles Borromeo. Exceptional figure of shepherd, he sought the encounter with his people above all by means of pastoral visitation, practiced almost four times in the great diocese. The constant and constant contact with the people opened it increasingly to the understanding of the instances of his time and determined to correspond with an effective pastoral action. 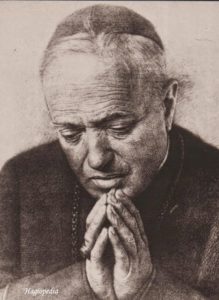 Faced with the problems of the world of work, it was proposed to increase the Christian social movement, to engage the young clergy in the speakers, an authentic life-school for youth. He encouraged the faithful to become civic, social, and political in order to animate society and structures with the values ​​of the gospel.

She had the heart to print to form a Christian mentality with accurate and accurate information. With inexhaustible charity during the First World War, it took the lead in every effort to relieve the suffering of soldiers and their families.

I was above all to sanctify his people with the collaboration of a working clergy, who was an excellent educator. He convened three Diocesan Synods and one Provincial Council; promoted the National Eucharistic Congress, that of Sacred and Catechistic Music. He was the first Cardinal to lead a pilgrimage to the Holy Land. He instituted numerous colleges for the education of young people; awaiting the establishment of the Catholic University and the founding of the Social Welfare Service which he named.

In 1898, during the disruption in Milan, caused by social malaise, vast areas of public opinion denigrated violently: crushed and crushed by slanders, but trusting in God, the Archbishop did not give up. Despite his proven fidelity to the directives of the Apostolic See, he was suspected of modernity and publicly attacked by the intransigent; in the accusation were involved seminary and clergy.

Inevitable, every defense, the Cardinal closed in silence and prayer, waiting for the darkness to pass. The events and works of 26 years of Milanese episcopate appeared in a light of truth during the painful illness. Now devoid of voice, because he was suffering from an incurable inconvenience to his throat, gave to his people, who came to the bedside of the dying Shepherd, a wonderful example of heroic patience and conformation to Christ Crucified. Reliance on the Most Holy Virgin, the source of his fortress, was extinguished at the sunset of the feast of Mary’s Purification on February 2, 1921.

Don Giovanni was born in Paris on February 19, 1887. His father, John, was originally from Pino; Mother, Sunday Andreani, of Tronzano; two small villages at the far end of the Lombardy shore of Lake Maggiore halfway between the shores of the lake and the mountains extending towards the Swiss border. Giovanni began attending the Seymours of Milan: from s.Pietro Martyr to Monza and finally to Milan. Equipped with a lot of intelligence and exceptional memory, he had great ability to undertake and without great efforts to complete his studies, and then completed his doctorate in Sacred Theology. On the eve of ordination, the Rector of the Major Seminary communicated him, according to the traditional practice, to his destiny: in the Archbishopric as Secretary of the Cardinal. On June 5, in the Milan Cathedral, the hands of Cardinal Andrea Carlo Ferrari received priestly consecration. He was 22 years and three months old.

He loved to repeat: “Cardinal Ferrari was the Father and Mother of my spouse for me. All I had was from him: above all the faith and love of our Lord Jesus Christ.” Rarely, the Cardinal exhorted those who stood by him with the word, but he incessantly ignited them with his ardor and slammed them with his example. Don Giovanni lived with him for almost twelve years, until the death of the Holy Archbishop.

It was a decisive moment for all his life. As he waited for his secretary’s duties, the Cardinal urged Don Giovanni to practice speaking and writing, saying: what is unknown, he learns. He also had the task of becoming interested in the nascent parish of S. Maria del Rosario in Milan. But soon Don Giovanni met with the younger and more numerous and lively people moving in the Archbishop-I go.

He was appointed Deputy Assistant to the Milan Youth Federation. His participation in the youth movement became even more intense and effective at the beginning of the First World War when, after recalling the arms of most members, the associations found a renewed impetus and a more lush development with the young. Then came the founding of the Catholic Catholic Youth that from Milan soon spread throughout Italy. After a few months of preparation, the new movement was officially inaugurated by Cardinal Ferrari in the Church of St. Sepulcher on the first Sunday of Lent of 1918.

Ecclesiastical Diocesan Assistant to the Catholic and Male Female Youth, Don Giovanni was the great animator of an ever more intense activity from one extreme to the other of the immense Dioceses. And so much social, eco nomic and political work was expanding in the male and female Cathelia Youth – in the so-called propaganda schools – groups of young people dedicated themselves to the apostolate of the word to make also to know outside of the Church the person and the doctrine of Jesus Christ.

In the frenzied fervor of such activity, it was difficult, if not impossible, to establish a distinct distinction between the Cardinal’s and his secretary’s iniquity. Don Giovanni has always fallen to the point at this point, without deepening it even in the face of arbitrary evaluations or appreciations. However, it is spontaneous to think of a twofold perspective: on the one hand, the fear of taking away the Father and the Master even a small part of benevolence; on the other hand, the opportunity to preserve the Cardinal’s prestige and the wishes of the sometimes too new and bold ideas of a young man of about thirty years.

In the last episcopate years, Cardinal Ferrari dreamed of crowning his pastoral work with two new works, almost the last of his deep insights: the Catholic University and the House of the People. the University, in the prophesy of that time, to illuminate with Christian thought the most bland moments of the moment and prepare the directives of the social and political life of the country.

The House of the People to give the masses, moving from the countryside to the city, a convenient aisle for the various economic, professional, cultural and religious needs and gathering the offices of Catholic organizations. In Cardinal’s thinking, the two works, even with their own physiognomy, had to be completed and converged towards the same purpose. And at first they were so united that Don Giovanni, while waiting for the House of the People, was also the first Secretary of the Foundation’s Foundation Committee.

On September 30, 1920, Cardinal Ferrari gave the admission to the diocese of the new University, approved by. Pope Benedict XV; and on 10 November, last time leaving the Archbishopric, he could admire and bless in Via Santa Sofia the vast land purchased to build the House of the People.

To secure the life of the Poipolo House and the various initiatives of apostolate, in the spring of 1920 Don Gionavan expose to the Cardinal an idea that has long matured: to invoke the best elements of the male and female Catholic Action to form a Community of lay people totally consecrated to the apostolate. The cardinal for several months retained the first Statuette scheme, responding to every effort to examine and pray. On November 17, 1920, from the bed of his martyrdom he signed the approval in experiment for three years of the Community of Saint Paul, then the Compagnia di San Paolo.

After the death of Cardinal Ferrari, Don Giovanni and the first members of the new community committed themselves to the creation of the Casa del Popolo, now called Opera Cardinal Ferrari. Immediate were the difficulties and reactions to a project thought to be too imposing and grandiose, but the wave continued with impetus and glamor. The old palace of Via Santa Sofia was restored and in the feast of St. John of 1921, while still works were the taking of possession and the start of the first activities: works of art, schools, a refectory, a pen¬sionato.

Every corner of the house was used at best, sometimes altering the use of the same room for different purposes according to the hours of day and night! The chapel dedicated to the Queen of Angels held the religious functions of the community and throughout the day the solemn Eucharistic adoration; every Thursday a night watch. It was the source of all enthusiasm and fervor.

Work began on a new building on Via Mercalli, on the opposite side of the vast terrain. A printing press was also set up for the publication of the first publications, including the Piccolo, initiated as a small daily newspaper (hence the name) but forced by the contradictions encountered to become a weekly, with the only chronicles of ‘ Opera. Thus became the organ of the Cardinal Ferrari Association, the great family of friends and supporters of various initiatives of social apostolate. On those pages Don Giovanni began his letters in which for so many years he would always convey his enthusiasm and his aptitude. Other publications were resurrected and highlighted: Carroccio, Dawn, La Festa, The Corrierino.

In the autumn of 1923, the various activities provided a more convenient and adequate accommodation in the new Via Mercalli building: the People’s Secretariat, the Employment Office, the Legal Office, the Office of the Assistance to the Prisoners, the Schools diurnal, technical summer night, professional arts and crafts (for which a later building would come), the Pilgrimage Office, retired for university and workers, popular cuisines, sports and exercise groups, and a band to cheer up the various maneuvers that followed in the house.

The new Chapel was dedicated to the Queen of Apostles. The activity soon took place in the schools of Monza, Gallarate and Vaprio d’Adda, then expanded in Italy and abroad. In the summer of 1923, the first expedition to Jerusalem to open a home; at the end of 1924 in Rome; in 1926 in Venice, Genoa and Paris, among the Italian emigrants of the Banlieux and the university of the Latin Quarter. In 1927 Bologna, with the Avvenire of Italy, the Casa di Redenzione Socia¬le of Niguarda and finally the leap over the ocean, in Buenos Aires.